Raffaela Lintl studied in Weimar, Berlin and Lübeck and attended master classes with Brian Zeger, Brigitte Fassbaender, Francisco Araiza and Cheryl Studer. For many years, she has been coached by the singing teacher Gudrun Bär.

Raffaela reached the finals of the NEUE STIMMEN singing competition in 2013 and was a finalist in the German national singing competition‚ 'Bundeswettbewerb für Gesang‘ 2014, during which she made her debut at the Deutsche Oper Berlin. At the International Maritime Singing Competition 2015 she received the 2nd prize as well as the audience award and at the renowned 47th International Antonín Dvořák Singing Competition toghether with pianist Thomas Cadenbach (Semperoper), she was awarded second prize in the “Lied” category, in 2014 she won a scholarship from the Richard Wagner-Scholarship Foundation.

In the season 2015/16 she was a member of the international opera studio at Theater Lübeck, where she performed, among others, Gretel in Humperdinck’s Hansel and Gretel and La voix de la tombe in Offenbach’s Les Contes d’Hoffmann. In 2016 Raffaela Lintl made her debut at Staatsoper Hamburg as First Maid in Richard Strauss’ Daphne in a production by Christof Loy and Michael Boder.

Further engagements led her to performances with the Tonkünstler-Orchestra at Musikverein in Wien, to Leipzig’s Gewandhaus, the Dresden Musikfestspiele, the Laeiszhalle Hamburg, and to the Norddeutsche Philharmonie in Rostock. In 2013 she sang Richard Strauss' Four Last Songs with the Orchestra of the Music Academy Franz Liszt Weimar under the baton of Christian Thielemann.

Engagements in the 2021/22 season included appearances at the Magdeburg Theater as Marie/  The Bartered Bride and in the world premiere of the opera Grete Minde by the German-Jewish composer Eugen Engel; at the Leipzig Opera Annie/ Die Kinokönigin - an operetta by yet another German-Jewish composer Jean Gilbert, as well as at the Schleswig-Holstein State Theater Marie/  The Bartered Bride.

Upcoming engagements in the 2022/23 season include her debut as Senta/Flying Dutchman at Sächsischen Landestheater, Sissi in Budapest at the Rudolstadt Theater and Marie in The Bartered Bride at the Schleswig-Holstein State Theater. 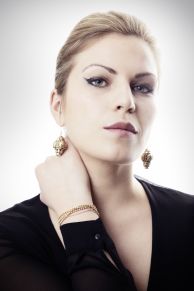 
"the most satisfying of the soloists"