Philipp Ahmann has been acclaimed especially for his interpretation of oratorio works ranging from Baroque to contemporary. His vast repertoire encompasses besides numerous works by Bach, Handel, and Telemann as well as works of the French, Italian and Salzburg Baroque, the key works of the Viennese Classic and the romantic period, such as Haydn’s The Seasons, Mendelssohn’s Paulus and Elijah, Mozart’s Requiem as well as Berlioz’ L’enfance du Christ, and, furthermore, works of the modern era.
Handel and Mozart in particular are the “connection points” between the concert and the opera stage, thus he already conducted Così fan tutte and Die Zauberflöte. In August 2019, Philipp Ahmann made his successful debut at the Ópera Nacional de Chile in Santiago with a staged production of Handel's Rodelinda.

He has been a guest at renowned festivals such as Rheingau Music Festival, Schleswig Holstein Music Festival, Mecklenburg-Vorpommern Festival and the International Handel Festivals in Göttingen and Halle.

Numerous CDs recorded with the MDR Radio Choir and the NDR Choir gained enthusiastic critical acclaim and were repeatedly nominated for the OPUS-Klassik award.

Philipp Ahmann, since the beginning of this year the new artistic director of the MDR-Rundfunkchor, presented on September 18, together with the MDR-Rundfunkchor, a commissioned composition written for the MDR during the lockdown, which is artistically very demanding with the current exceptional situation, especially for the choir and virtually impressive: the composer Michael Langemann wrote the piece "Inseln - Gesang von ferner Nähe". The composition was premiered last week on September 18th via video.

Listen to and explore more under: 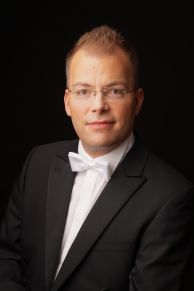