Born in Bad Pyrmont, soprano Julia Borchert studied at the Folkwang University of Arts in Essen and in Freiburg im Breisgau.

Since her brilliant role debut as Brünnhilde in Magdeburg, directed by Jakob Peters Messer, she has secured a permanent place in the ranks of dramatic sopranos, which she further consolidated with her engagement as Isolde at the Theater Hildesheim where she delighted audiences and critics alike.

Her beginnings took her trough the Nationaltheater Mannheim to the Niedersächsische Staatsoper Hannover, from where she continued her career at important opera houses in Germany and abroad.

The change to dramatic roles led her via Leipzig, Kassel and Linz to the Bayreuther Festspiele. She made her debut as Voce dal cielo/ Don Carlo under Daniele Gatti at La Scala di Milano and in Tokyo. She sang Ortlinde at the Teatro Massimo di Palermo under Piettari Inkinen and later at the Palau de les Arts in Valencia under Zubin Mehta. Several concert tours have taken her throughout Europe, Russia and Australia.

As Woglinde she can be heard in a live concert recording with the Rundfunk-Symphonieorchester Berlin conducted by Marek Janowski, she works regularly with the WDR-Sinfonieorchester Köln, with whom she has performed Schubert's Stabat Mater and Wagner's Wesendoncklieder under the musical direction of Michael sang Sanderling.

More recently she has celebrated success with Gurre-Lieder/Tove in Essen, song recitals featuring works of Wagner, Mahler and Strauss, as well as Rosalinde in J. Strauss' Die Fledermaus. Future projects include Giuseppe Verdi's Requiem and Redemption of César Franck.

Ecstasy of Opera: Isolde debut in a new production

Following her last season’s brilliant debut as Brünnhilde, Julia Borchert is looking forward to another great highly dramatic Wagner-role. From November 16, she will take on the role of Isolde in the new production of Tristan und Isolde (staged by Tobias Heyder) under the baton of Chief Conductor Florian Ziemen at Theater Hildesheim. This is a special production for the house, as it will be performed for the first time  on the occasion of its reopening.
Performance dates: November 16/24; December 7/22; February 9; April 12/18; May 9. 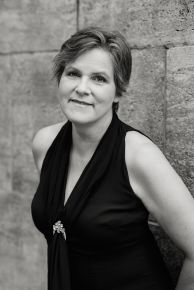