Giulia Montanari is an Italian Soprano who grew up in Germany. After having completed a degree in Musicology and Languages at Ludwig-Maximilian-University Munich she graduated at the University of Music “Franz Liszt” Weimar in the class of Prof. Siegfried Gohritz (vocal training).
In June 2018 she won two prizes at the First International Voice Competition “Ebe Stignani” Imola, Italy.

Giulia has been selected as a member of the NRW opera studio program in Germany for the season of 2019/20 in which she performed in several roles and concerts at the Oper Dortmund, Oper Wuppertal and Musiktheater im Revier Gelsenkirchen. From the season of 2020/21 Giulia has become an ensemble member of the Aalto-Theater Essen where she sang the roles of Euridice (Orfeo ed Euridice), Adele (Die Fledermaus), Belinda and First Witch (Dido and Aeneas), among others.

In 2019 Giulia was engaged to sing the Queen of the Night (Die Zauberflöte) at the "Festival der Deutschen Sprache" in Bad Lauchstädt under the patronage of Edda Moser. Earlier the same year she sang the role of Rosita in Offenbach's "Un mari à la porte" at the Essen Philharmony.

While she was still studying, Giulia started her career at the Deutsches Nationaltheater Weimar. In the 2017/18 season she gave her debut in the role of Papagena (Die Zauberflöte). In the next season she returned with the roles of Sandmann and Taumann in the new production of "Hänsel und Gretel", and could be heard as a Soloist in several concerts with the Staatskapelle Weimar. She has also been performing the main role in the world premiere of "Der Eisblumenwald", a children’s opera composed in 2018 for the Deutsches Nationaltheater Weimar by Jörn Arnecke.

Following her passion for baroque music, Giulia Montanari took part in various baroque masterclasses and festivals. She was invited twice to sing at the Festival du Périgord Noir (France) where she performed the role of Salomé in Stradella’s "San Giovanni Battista" and the role of La Bellezza in Händel’s "Il trionfo del tempo e del disinganno". In 2016 she sung at the Internationale Bachakademie Stuttgart coached by Hans-Christoph Rademann.

A keen concert soloist, she can be heard performing a wide range of Lied and Oratorio repertoire that ranges from early baroque compositions to contemporary music. In the past years she performed important works and recorded them on CD: Mozart’s "Requiem" and "Coronation Mass", Rossini’s "Petite Messe Solennelle", Telemann’s "Lukas-Passion", Orff’s "Carmina Burana" and Rutter’s "Requiem".

Since 2010 Giulia has sung regularly with international ensembles including the Norwegian Soloist Choir, the Bavarian Radio Orchestra/Choir, the World Youth Choir, the Chamber Choir of Europe, the Chamber Choir of Scandinavia and the Bavarian Youth Choir. Her work with these choirs has taken her throughout Europe and the Middle East, enabling her to perform with notable conductors such as Herbert Blomstedt, Stefan Parkman, Anu Tali, Mariss Jansons, Ulf Schirmer and Peter Dijkstra.
Download english biography as PDF file
Download german biography as PDF file
Download complete artist info as PDF file 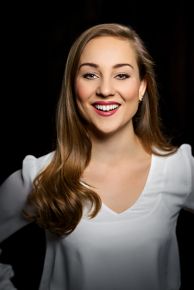 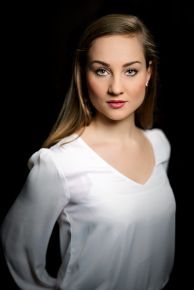 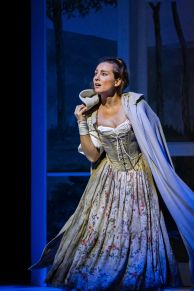 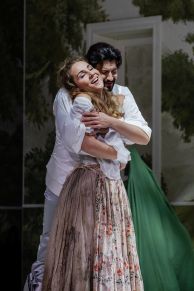 Arabella - Aalto Musiktheater Essen
On stage together with Heiko Trinsinger