Baritone Kevin Greenlaw was born in St. Charles, Missouri, and began his musical education in New York at the Eastman School of Music.  He subsequently moved to Europe where he completed his Masters of Advanced Opera degree in Glasgow at the Royal Conservatoire of Scotland and later entered the ensemble of the prestigious Paris National Opera, where he sang several roles such as Morales in Bizet’s Carmen, Juan in Massenet’s Don Quichotte, Kuligin in Janácek’s Katya Kabanova and covered roles such as Guglielmo in Mozart’s Cosi fan tutte, Pelléas in Debussy’s Pelléas et Mélisande and Ford in Verdi’s Falstaff.

After Paris, Greenlaw joined the ensemble of Theater Dortmund, where he debuted in several essential baritone roles such as Il Conte in Mozart’s Le Nozze di Figaro, Marcello in Puccini’s La Bohème, and title roles in Mozart’s Don Giovanni and Tchaikovsky’s Eugene Onegin.  Greenlaw’s international career has taken him all across the world, largely in France, UK, Germany, USA, Brazil, Japan and Italy. His definitive roles have been for example Oreste in Gluck’s Iphigénie en Tauride with Komische Oper Berlin, Pelléas with the Glyndebourne Festival, Opéra National de Lorraine, Opéra de Rennes and as a cover with the Metropolitan Opera, Chorèbe in Berlioz’s Les Troyens with the Festival Amazonas de Ópera in Manaus, Brazil,  Danilo in Lehár’s Die Lustige Witwe with the Opera National de Lorraine, Figaro in Rossini’s Il Barbière di Siviglia with Opera Angers-Nantes, Escamillo in London at the Royal Albert Hall and the O2 Arena, and Il Conte with Theater St. Gallen in Switzerland.  He has achieved wide acclaim in his portrayal of the iconic title role, Hamlet, by the French composer Ambroise Thomas with Angers-Nantes Opera in France and is currently singing Marcello with Jyväskylä Opera.

Since 2016, Greenlaw has been living in Finland and has embarked on the musical theatre scene in his new home country. He debuted at the Finnish National Opera as the Phantom in a new production of Andrew Lloyd Webber’s smash hit, The Phantom of the Opera. He has sung as a soloist with many prestigious Finnish orchestras such as Tampere Philharmonics and Turku Philharmonics with conductors such as Santtu-Matias Rouvali, Jaakko Kuusisto and Ville Matvejeff.

Future performances include Mercutio in Roméo and Juliette and Albert in Werther in Rijeka National Opera in Croatia, Henry Higgins in My Fair Lady in Trancoso Brasil, and the Baron in La Traviata with the Savonlinna Opera Festival. 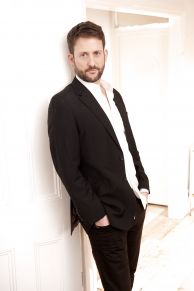